Introducing Sponsorware: How A Small Open Source Package Increased My Salary By $11k in Two Days

After digging deep on SQLite during a pair programming session with a client/friend, I had an idea…

About 45 minutes later, a proof-of-concept was tweeted it out: 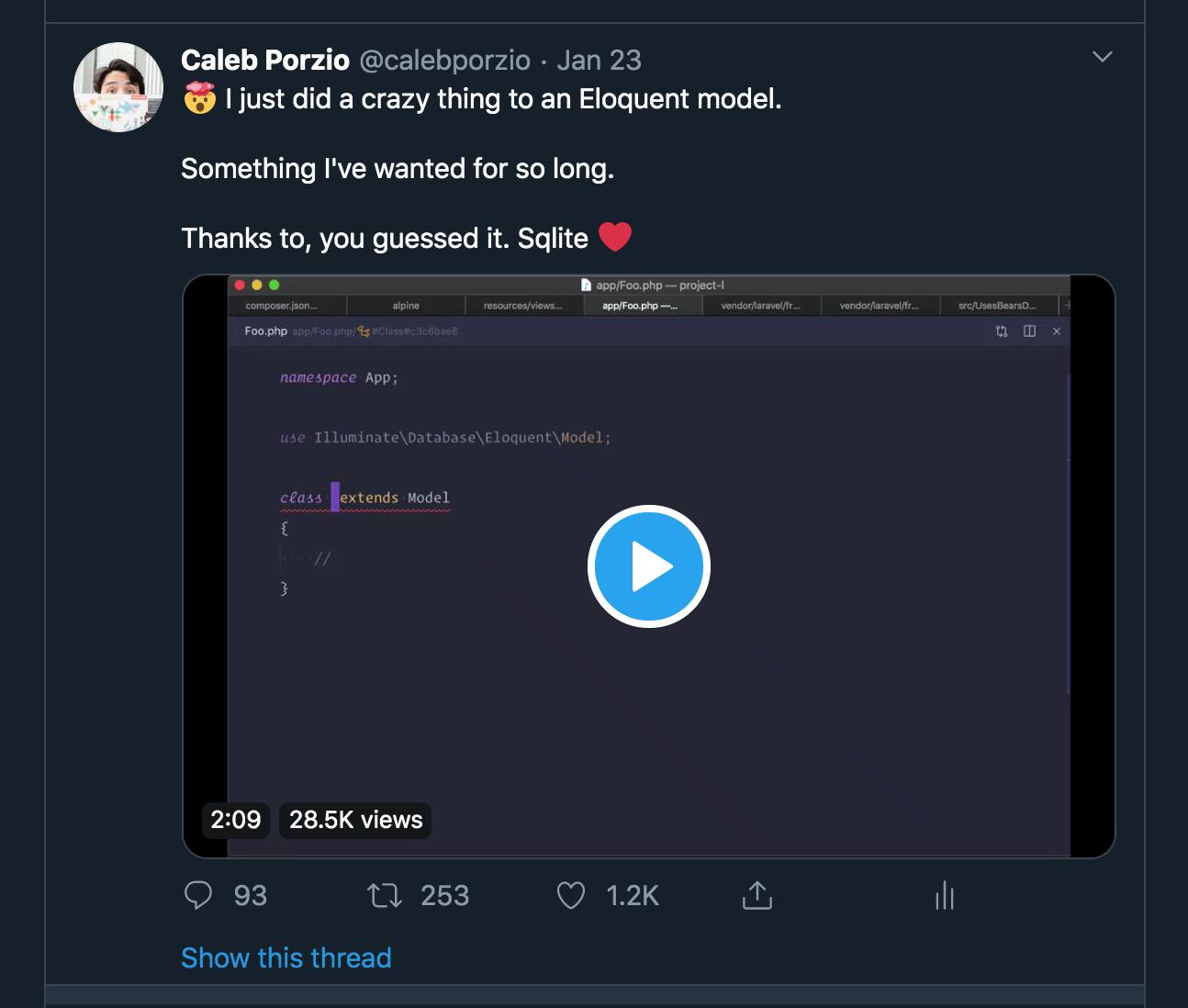 Based on the number of replies containing nothing more than a single 🤯 emoji, I could tell people dug the experiment. I immediately started getting requests to share the code or publish an open-source package.

At the moment, I felt like I had two options ahead of me.

There are two problems I saw with these options.

I talked it over with my good buddy Daniel Coulbourne on our podcast No Plans To Merge, and we (mostly he) came up with a pretty rad solution.

Here’s the little snippet that started this whole thing:

After hearing me out, Daniel proposed a (brilliant) third solution:

I adored the idea. It seemed like the best of both worlds. It hit all the points I wanted:

I wrote the first iteration of the package in one day and sent out an email and tweet the next morning. 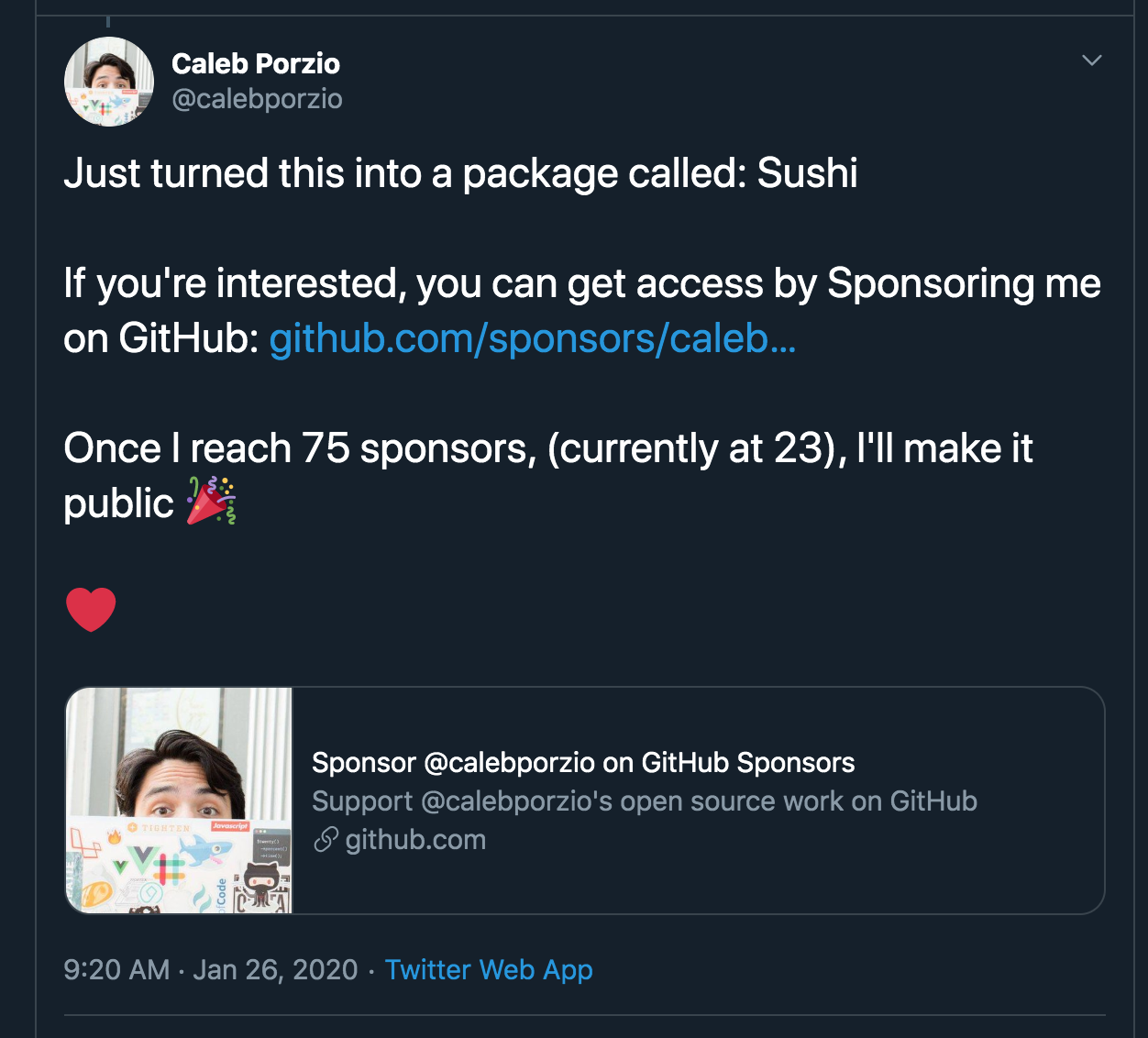 Before the email went out, I had 23 sponsors and was making $573/mo from GitHub Sponsors.

I announced I would be open-sourcing the package (Sushi) after I reached 75 sponsors. (decided to up it at the last minute from the original 40)

By the next evening, I hit 75 sponsors and was now making $1560/mo from GitHub Sponsors 🎉! 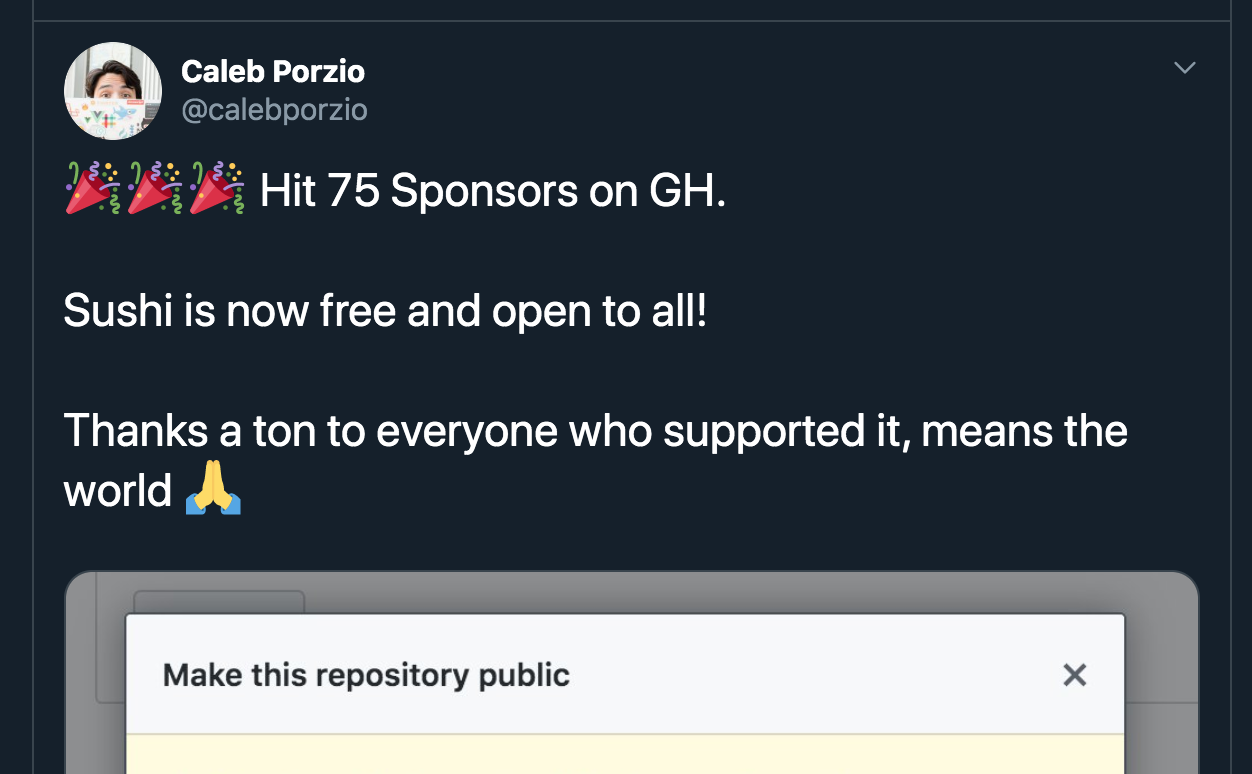 For a guy who spends most of his time programming for free, that means a whole lot.

I’m overwhelmed with gratitude towards the community. I’ve since grown to 101 sponsors and am generating $2633/mo from GitHub Sponsors (at the time of writing). Not enough to start eating avocado toast every day, but certainly enough to cover rent and groceries. (Low rent costs brought to you by Buffalo NY 🤑)

Not long after, The Changelog had me on to talk about the newly coined “Sponsorware”, you can listen to the episode here. After that, WIRED magazine contacted and interviewed me for a potential article! (50/50 shot at getting published, but still pretty cool)

My hope is that the word spreads and this model will provide another pathway for open source maintainers to fund their work. This way, they can keep doing what they love, and the community can continue benefiting from the work.

I DEFINITELY have plans of repeating the “Sponsorware” formula very soon.

Disclaimers (Your Mileage May Vary)

It's worth mentioning that some stars aligned for this to happen:

In my career as a web developer, every company and agency I’ve worked for has directly benefited from open source software, usually in a big way. A lot of times, an agency’s core business model is based on advertising proficiency in open source projects.

Frameworks like Laravel and Vue have things like conference sponsorships to offer, but for someone like me with smaller projects, it’s hard to provide EXTRA value to companies and agencies on top of the work I’m already doing.

It never really occurred to me as an imbalance in the force, but now working as a maintainer almost full-time, I’m face to face with the reality: It’s really effing hard to make money in open source.

That said, I’m very optimistic about the future. There are lots of efforts going on right now to fix the problem, projects like Open Collective, Patreon, and GitHub Sponsors to name a few. Also, media outlets seem very interested in covering stories on the topic.

Here’s to a future where maintainers (even Jeb Schmidts like myself) get paid too!

If you’ve seen someone attempting this model in the wild (or have even done it yourself), I’d love to hear about it. My Twitter DMs are always open!

Update: There is now a dedicated GitHub repo to host the Sponsorware “recipe” and case studies: https://github.com/sponsorware/recipe

Thanks for tuning in!

I send out an email every so often about cool stuff I'm working on or launching. If you dig, go ahead and sign up!